April saw a 1.25% rise in the National Insurance rate, increasing from 12% to 13.25% for employees. This couldn’t have come at a worse time, with the 54% energy price cap increase and 30-year-high inflation rate also coming into play, along with everyday expenses such as heating, fuel and grocery costs continuing to soar, leaving more and more taxpayers scraping every last penny to deal with the cost of living crisis. In fact, a Yorkshire Building Society study found that 74% of people feel that the crisis will negatively impact their finances.

In response to this crisis, The Chancellor outlined in the Spring Statement that the National Insurance threshold will increase in July, from £9,880 to £12,570, bringing it in line with the Income Tax threshold. It’s been suggested that this change will be beneficial to the majority of taxpayers, but will this actually be the case? Let’s take a look at these changes in more detail…

What Is The National Insurance Rate Now?

The table below outlines the current rates.

What Will The National Insurance Rate Be From July 2022?

As outlined above, Rishi Sunak announced during the Spring Statement that the National Insurance threshold would be increased by over £2,500 from July in a push to help the majority of taxpayers with the cost of living crisis. It’s suggested that this will reduce most taxpayers’ bills by £330, but is this really enough to cover the exponential increase in the cost of living?

Calculations from the Institute for Fiscal Studies also suggest that for the year 2022–2023, employees who will benefit from this threshold increase will be those who earn less than £35,000 a year. But with the increase only taking effect from July 2022, you will not see the full benefit until the 2023-24 tax year.

Higher earners will actually be worse off, seeing a significant increase in their National Insurance bills. When you consider that near enough every household expense has increased at an unprecedented scale, there’s no doubt that this National Insurance increase, together with the cost of living crisis, is going to have a compounding impact on those affected – specifically anyone who earns close to £35,000 and above. And, in fact, it is highly unlikely that the threshold increase will adequately protect those who earn under £35,000 from the cost of living crisis.

The graph below compares National Insurance bills for employees in 2021–2022 and 2022–2023 for different pay brackets. 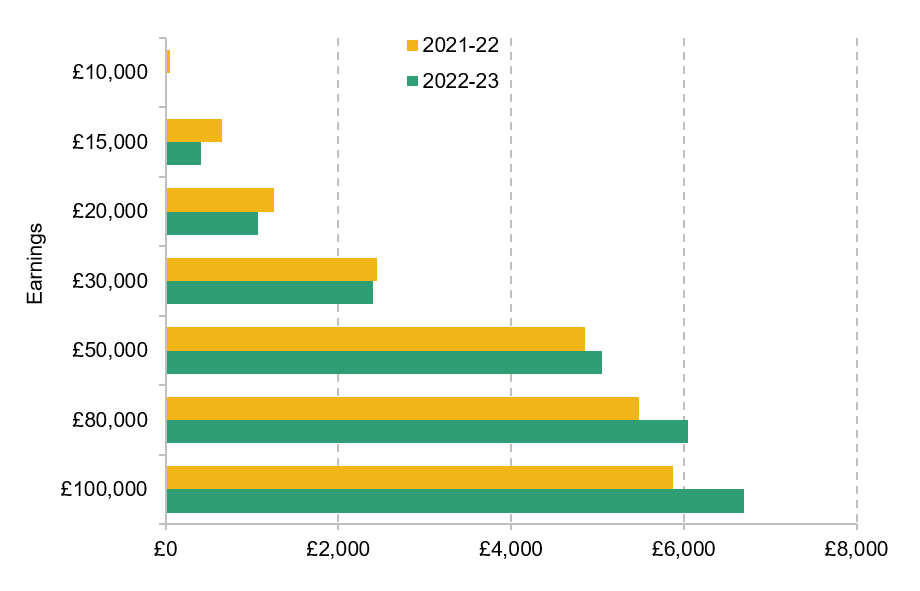 Let’s look at some purely fictional, simplified scenarios comparing a variety of salaries.

A supermarket employee earning £12,500 per year.

Where To Seek Help

If you’d like to seek advice regarding your own personal circumstances around your National Insurance contributions and requirements, get in touch with one of our experienced accountants who will give you tailored advice specific to your circumstances. If you’re new to Warr & Co, you’ll want to take advantage of our free consultation offer, available to anyone looking for accounting services! Grab your free consultation via our website. We also have a handy National Insurance calculator that you can use to give an estimation of how much you can expect your National Insurance bill to be this year.

For more information about the cost of living crisis and some useful tips on how you can make your money go further, take a look at this Forbes cost of living article.