Spectre And The Payback

“Gordon is a Moron! Why did they choose him?!” Spectre thought to himself. “I recommended 3 perfectly good sociopaths and put their names forward to junior Treasury Minister, Barnes Stevens. I even wrote the result of the review for them but instead Stevens went for Moore and he in turn let contractors off the hook by eliminating tax liabilities for loans advanced before 9th December 2010”.

Spectre started to develop the germ of a plan and 1 hour later he was on a train heading for the north west of England and enjoying a mediocre cup of tea. The train finally pulled into the station and Spectre took a taxi and headed straight for the office of Peter Sanser.

Sanser wondered what Spectre wanted to see him for but was happy to meet again with the man who had made him a small fortune by conning contractors. Peter spotted the taxi pulling up outside his office and recognised the bowler hatted man struggling to leave the taxi. Spectre handed the taxi driver a £20 note and insisted on collecting all of his change.

“Ian, how are you?” Peter asked, I’ve just made a pot of tea using the finest loose leaves. Spectre almost smiled. “I’m very well thank you” he said as he walked into the office and sat on a newly installed leather sofa. “How’s business” Spectre continued.

“Well I have to admit that it’s not like the good old days of contractor loans” Sanser replied.

“I have an idea” Spectre said. “how about demanding that contractors repay their loans?”

“But we told the contractors that we would never do that” Sanser replied.

“Did you give any written undertakings?”

“No, of course not, if we had done that we couldn’t have called the advances loans.”

“Precisely!” replied Spectre. “I’ve taken the liberty of  inviting Gus Denim from Palmerstons Solicitors to join us. He should be here in 5 minutes. I briefed him in a phone call while I was on the train. You may know Palmerstons, they’re local to you and have built their business by taking aggressive action against motorist who illegally park their cars whether intentional or unintentional.”

Precisely 5 minutes later a Bentley pulled into the car park and outstepped a youthful Gus Denim.

“OK Peter, what we do is we arrange for the trustees in the Isle of Man to assign the loans to a new Isle of Man company. It will have nominee directors and shareholders of course, but it will be your company. You give us the details of all of the loans advanced and we’ll write to the contractors demanding repayment. And just like we do with parking notices we’ll offer them a large discount if they settle within 30 days. The discount works really well with parking notices.”

“But many contractors will have changed address” Sanser said. Spectre butted in “for any you can’t find, give me their NI numbers and I’ll get their current addresses from HMRC records”.

“Sounds good” Sanser said, “but what do you get out of it?”

“Well” said Gus “we work on no win no fee basis and we want a percentage of everything we collect.”

“Nothing personally of course” Spectre interrupted “but you will recall that Peter referred to a discount for prompt payment. Anyone who takes this offer has their loans written off. That’s where HMRC come in. They will make an immediate IHT charge in respect of the amounts written off.”

“That sounds like a plan” Peter said. “A win win win!”

“And just to reinforce the message we’re going to provide details of the Samaritans on our letterhead for any contractor who feels suicidal” Gus added.

The three men fell about laughing at the last comment and the meeting was drawn to a close. Gus said he would arrange to form an Isle of Man company for Peter with nominees in place and Peter agreed to let Gus have details of all contractor loans. 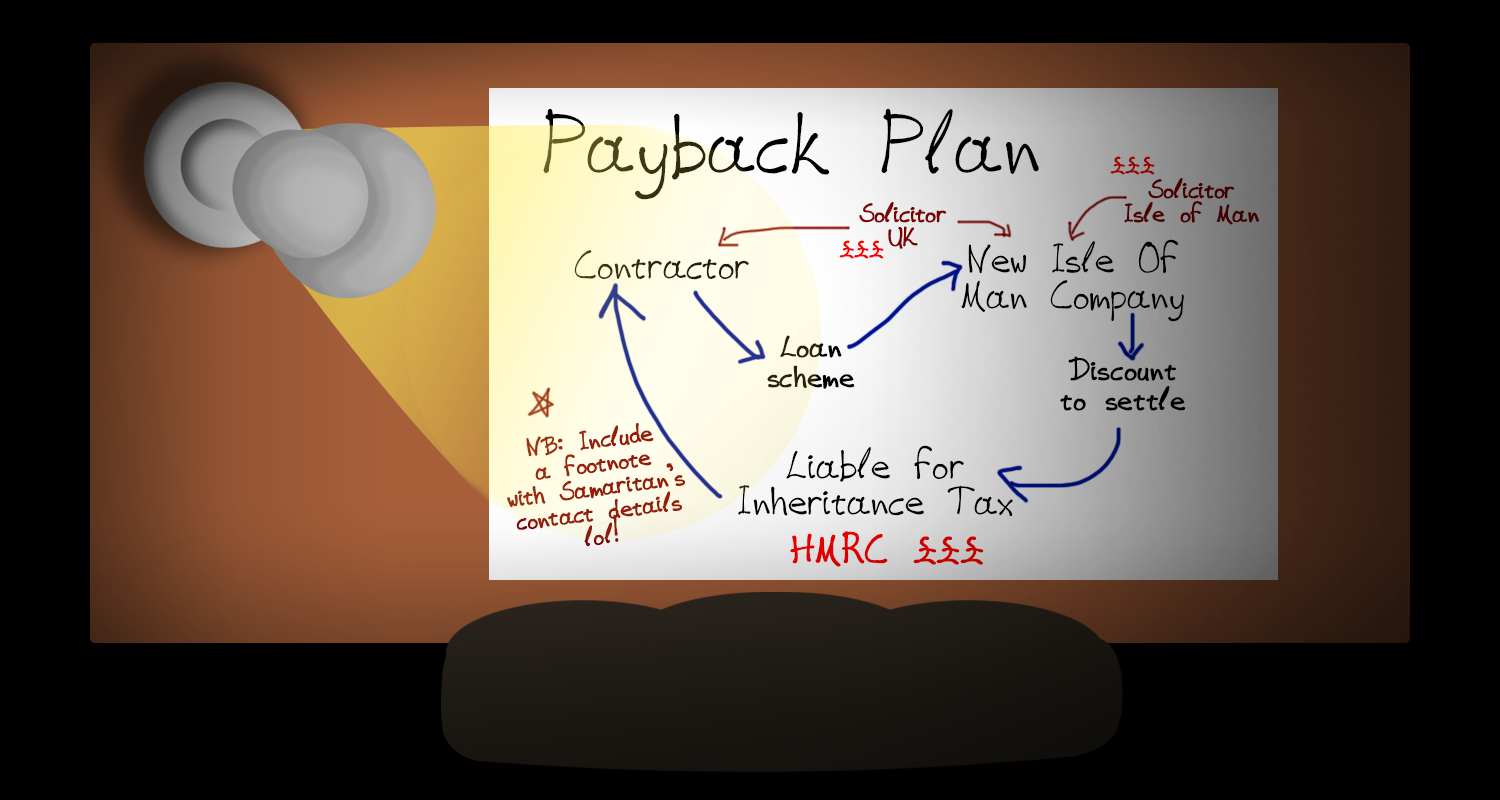 At Warr & Co Edward Peter’s was in a meeting with contractor client Clare Browne. Clare handed Edward a letter she had received from Palmerstons Solicitors. Edward’s jaw dropped as he read the letter.

“I trusted these people” Clare sobbed. “They were very plausible and had counsel’s opinion from none other than Claude Simmonds at City Tax Chambers. About 20 other contractors working at Eastpac Bank joined Brisbane Pay More. They promised that the loans would never be recalled”

“This is a problem” Edward said. “Your loans total £200k and Palmestons say that if you pay £24k they will write the balance off. That’s a trap. If that happens HMRC  will be after you for Inheritance Tax.”

“It may as well be a million pounds” Clare said. “ I sold my house to pay the tax on the loans and moved into rented accommodation. My husband of 20 years left me, (who can blame him?). I was just getting back on my feet despite the fact that I’m not earning anything like I was at Eastpac. I think I’m facing bankruptcy?”

“Wait” Ed said. “If you’ve got nothing to lose let’s kick up a fuss. We’ll write to Claude Simmonds. He must have understood the scheme would only work if a representation was made to the contractors that the loans could never be recalled. We’ll also make a complaint against Palmerstons to the Solicitors Regulatory Authority. Solicitors must act with integrity when accepting an appointment and if they step out of line the SRA will in some circumstances step in. Finally, I’ll contact a solicitor I know in the Isle of Man. The trustees may have acted improperly. Unfortunately I can’t say how this is all going to work out but you’ve got nothing to lose by trying.

Ian Spectre, Peter Sanser, Gus Denim and Claude Simmonds are fictional characters. There is no Palmerstons solicitors and no organisation called Brisbane Pay More. The promoters of loan schemes were professional people who genuinely thought that the schemes they concocted would work. The typical 10% fees they took did little more than cover their costs. Respectable barristers who allowed their names to be used to give a green light to loan schemes all did so in good faith believing that HMRC would never be able to collect tax on loans.

If you were a victim of a loan scheme and you receive a letter from a firm of solicitors demanding you repay a contractor, fight back! Attack the trustees who sold your loan, embarrass the barrister who gave an opinion on the scheme and report the solicitors to the SRA.

Finally, if all else fails and legal proceedings are issued, appoint a solicitor and ask him to seek security of costs. The court will almost certainly require a non resident newly formed company to deposit an estimate of your costs in defending the claim with the court. A sum of £100k per claim would not seem unreasonable.

We share all the latest news on our social media channels.