My Word Is My Bond

A fine principle which most of us aspire to.

For Ian Spectre, however, it’s a tad inconvenient, and he attaches the same level of importance to that statement as he does to moral values. Spectre and his HMRC posse are only bound by law. This blog shines a light on HMRC’s tendency to say one thing then do another. The topic in this case is Contractor Loan Schemes.

What is a Contractor Loan Scheme?

A contractor loan scheme on offer is usually a sign that you should jump in your Aston Martin and put the pedal to the metal – just say no, kids!

When a company (sometimes a Partnership, an Umbrella Company or a Remuneration Trust) offers you a contract with money paid up-front and tells you you’ll basically get to keep it all because it’s not taxed, don’t trust them, because of course this is never the case. If it sounds too good to be true, it probably is!

Thousands of contractors signed up to these schemes over the last 10 years, but thankfully most schemes have now closed

It’s payment, not a loan, you’re never going to pay it back to the company, so it only ever counts as income – which of course means you’ll be paying tax on it. In addition, it’s seen as a ‘tax avoidance scheme’, so it can really get you into a lot of hot water with HMRC.

It won’t save you money!

In fact, it’s likely to cost you more than standard taxed income because the scheme providers fee is around 10%.

And if things get really messy and the company that talked you into the scheme abandons you when Spectre starts chasing you, you may even have to foot professional fees!

And that’s what happened to James

Here at Warr & Co we’ve been acting on behalf of James (not his real name of course), for just over 3 years. James had fallen prey to a promoter of contractor loan schemes. He realised the error of his ways and wanted to get his affairs in order to close a miserable chapter in his life. The years in question were those to 5 April 2013, 2014 and 2015.

We first completed the 2013 return, not including the loans as income but recording them on the return with a detailed explanation and stating that James was prepared to accept that the so called loans were taxable income. The 2014 return was initially filed on the same basis.

It was no surprise when HMRC opened an enquiry into 2013. It was also no surprise that they sent a standard letter without considering the disclosures on the return.

We entered into correspondence with HMRC and at the same time amended the 2014 return to include all loans as taxable income. James paid the tax liability. Again it was no surprise when HMRC opened an enquiry into the return by means of a standard letter without considering the information on the return. We simply pointed out that all loans had been taxed. At their request we provided evidence of the amounts returned.

The 2015 return was filed again declaring all loans as taxable income and James paid the full liability. An enquiry into 2015 is expected but has yet to be opened.

Correspondence on 2013 continued and eventually in August 2016 an agreement was reached as to the liability. HMRC stated that they wished to settle by means of a contract, James would offer to pay the agreed sum and HMRC would accept the offer, closing that year. In their letter HMRC stated “on receipt of the signed offer, I will then write, confirming my acceptance”. We posted James’ signed offer and assumed the matter was closed. How wrong we were.

Then Spectre got involved…

Unbeknown to us, the villainous Ian Spectre had involved himself in James’ affairs. 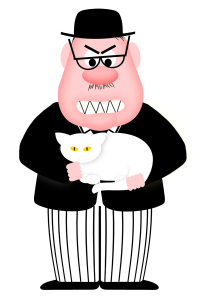 “This situation was all too civilised for me. Sure the lads at HMRC have done their bit, or not done their bit if you choose to see it that way, by ignoring the details and sending the same old standard letter out no matter the circumstances.

But this ‘agreement’, no I can’t abide by that. Sure we’ll make James pay, but I refuse to make it an easy and stress-free experience for him, we are HMRC after all and he needs to be punished!

Yes, I think I’ll just go back on everything decided up to this point and leave this case lingering above this tax payers head for a bit longer – haven’t decided how long yet. While I’m at it I may as well do the same for 2014 and 2015, mwahahahahaha! “

We asked Spectre for copies of documentation with third parties and internally under the Data Protection Act to see if we could work out what Spectre’s angle was. But he claimed an exemption and refused to supply any meaningful information (that is so him).

Clearly Spectre wants to create misery for James and many other contractors who have found themselves to be victims of the tax avoidance industry. Just like Steve (not his real name), read about Steve’s struggle with Spectre here.

And while HMRC and Spectre don’t mind making the ‘little guy’ wait at their mercy, they have thoughtfully put a deadline together that we all have to stick to…

‘The government is also committed to ensuring that those who have used these schemes in the past aren’t allowed to get away with it. To meet this objective, the government will introduce legislation to put beyond doubt that all loans or debts from a disguised remuneration scheme will be taxed as earnings if they haven’t already been fully taxed or repaid on or before 5 April 2019.’

How can you avoid the Contractor Loan Scheme trap?

Watch out for any of these claims:

Many of the companies operating Contractor Loan Schemes will call themselves ‘promoters’ and tend to be located outside of mainland UK.

What if you’re currently in a Contractor Loan Scheme

Leave the scheme as quickly as possible and seek professional advice. You’re likely to end up in a similar situation to James, we’re sorry to inform you. Call our team for a free no-obligation consultation and we’ll do what we can to help you out. And hey, perhaps your story will even feature in a Spectre blog one day!

And why, exactly, isn’t Spectre going after the companies who are scamming poor, innocent contractors?

We’d LOVE to know… The Government has brought in some legislation, but still fails to outlaw this type of activity, perhaps Ian Spectre’s just earning too much from this type of thing to care to protect the little guy?