The first weeks and months of running your own small business can be seriously confusing, and Ian Spectre the Hector and his pals at HMRC sure don’t make it easy for the little guy! In this blog we explore estimated VAT bills – and why you need to watch out for them!

The characters in this blog are:

‘Arthur Howard’ is a pseudonym of one of Warr & Co’s real client’s; the details in this blog represent Arthur’s experiences dealing with HMRC. For reasons that will become apparent, if we gave his real name he would almost certainly be Hectored!

About 6 months ago, Arthur was offered a contract and decided to leave permanent employment and become a computer contractor. He was referred by a colleague to accountant, Edward Peters at Warr & Co. A meeting took place, Edward formed a company for Arthur called Howcon Services Limited and completed several HMRC registrations including VAT. Edward stressed to Arthur that as soon as he received his VAT registration certificate in the post he should register for online VAT so he could file VAT returns electronically. Edward then went over the operation of a simple accounting system and Arthur left the meeting feeling well informed and ready to start work as his own boss.

Over the next 3 weeks, Arthur received a deluge of post addressed to Howcon Services Limited. 90% of it was junk mail but there was the odd official document. One of these was his VAT registration certificate which he filed in a ring binder file intending to look at it later.

Meanwhile, over in Colchester, retired professional Hector, Ian Spectre, received an email from Servico, his electricity supplier. They asked him to submit his meter reading through their online portal. Spectre checked his meter reading that evening and wrote it down on a piece of paper. The next day he tried to log in to Servico’s online portal but couldn’t remember his password. He had a note of it a home but, forgot to take any action.

Spectre’s memory was jogged two weeks later when he received an estimated bill from Servico. He checked the estimated meter readings and realised that his real liability was about £200 higher than the estimate. He nevertheless paid the estimated liability the very next day since he was unable to log in and update his metre reading at that moment, which seemed like a reasonable stop-gap until he could find the time to sort this all out. A week later he managed to retrieve his password, and submit his meter reading via the Servico online portal. A few days later an additional bill for £200 arrived. He paid it the next day and was content knowing that he was up to date and not in for any nasty surprises. 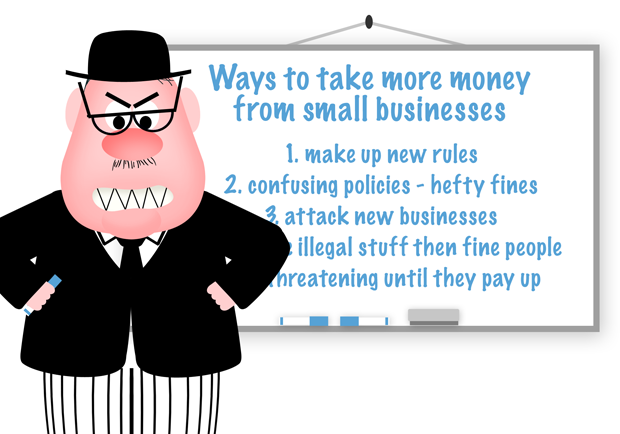 A couple of months later, Ian Spectre was mulling over this matter white bored at home, retirement isn’t all its cracked up to be for an evil villain. “Suppose”, he thought, “A business had deliberately accepted an estimated electricity bill knowing full-well that it was underestimated. The electricity companies, at that point, have potentially lost revenue” he mused, “Let’s call it PLR” (Spectre loves acronyms, btw fyi). He asked himself “could the hypothetical electricity company have levied a penalty based on this PLR once the real liability was known, say 15%?” No, he thought, those guys have too many scruples and besides, the Regulator would be down on them like a ton of bricks. “Doesn’t seem fair that small business owners aren’t squeezed for every penny by the energy companies, but perhaps could something be done in the tax world?”, an evil grin spread across Spectre’s face – he had a plan!

The next Monday morning Spectre marched into the local VAT compliance office. He walked straight through the open plan area and into Polly Brown’s small office.

“I need your office for one hour every Monday morning, I have hell to raise for new unsuspecting business owners UK-wide – totally worth coming out of retirement for! Make me a strong cup of tea with one sugar and don’t bother me for the rest of the day!” he barked. Polly put the kettle on.

Fifteen minutes late Spectre spotted Howcon Sevices Limited, bingo – exactly what he was looking for! This newly formed business was 2 days late in filing its first VAT return. Spectre drilled down into Howcon’s records and found the application to register for VAT. He also spotted that Howcon had not registered for online VAT. He did some calculations from the information available and made an educated guess that Howcon’s VAT liability would be about £2,000. But he arranged for an estimated assessment in the sum of £700 to be issued, knowing full-well that this was an underestimation – all part of the plan!

A few days later Arthur returned from work one evening and opened his post to find a VAT assessment for £700. “That’s not bad” he thought, knowing little about what was due in these early days of his business. He went online and made a £700 payment, wouldn’t want to get off on the wrong foot with HMRC now, would he?

The next Monday, Spectre was sat down in Polly’s office impatiently waiting for his tea. He went straight into Howcon’s VAT account and saw that the £700 assessment had been paid, success! He left with a big grin on is face without waiting for his tea, now for part two of his plan!

A couple of days later he gave Edward the accountant a quick ring to tell him what had happened “Did you register for online VAT?” Edward asked. “No, I forgot all about it” replied Arthur. “Don’t worry” Edward responded, “register now and email me your records, I’ll then let you know what to file”. Arthur did as he was asked and three days later he filed his first return online. It showed a liability of £2,200 so he made a second payment of £1,500 expecting a very small interest liability, but certainly no nasty surprises as he was up to date.

The following Monday, while Polly was making his tea, Spectre opened Howcon’s account to check up on his good work. He blinked twice taking in what he saw on the screen and yelled “GOTCHA” at the top of his voice. Polly, who was approaching her office, dropped Spectre’s cup of tea. He called her in, informed her that she was a simpleton for dropping his tea, showed her the screen and said “this customer has deliberately underpaid his VAT by £1,500 and, had we not prompted him, we might never have been paid! We have PLR here. Issue a 15% penalty notice straight away and get someone on your team to look for other non compliant customers. They’re likely to find more PLR money if they snoop about in the accounts of new small businesses who have been suitably confused by the UK tax system, it’s a gold mine, I tell ya!”.

A week later, Arthur opened his post and saw a penalty notice in the sum of £225. He phoned Edward the next day and emailed a scanned copy of the notice. To his surprise Edward discovered that HMRC were entitled to issue this penalty notice and there were no grounds for an appeal – does that seem fair to you? No? We agree, HMRC’s underestimation and apparent bending of the rules seems quite unfair.

Despite having no grounds to appeal, Edward wrote to the VAT office and asked them to consider withdrawing the penalty notice. The letter arrived on Polly’s desk on a Tuesday (Lucky for Arthur, Spectre spends his Tuesdays visiting local childrens’ hospitals to steal jigsaw puzzle pieces). She had been told by Ian Spectre not to ‘mess’ with any of his cases, but she fancied getting back at him for all of his unreasonable office demands. So she had a look around and in one of her draws she found Spectre’s notebook with some of his workings and realised he had deliberately under estimated the liability. Off her own back, she cancelled the penalty.