Ian Spectre will tell you when he corners you that one of his finest moments was back in 1999 when he came up with what is now known as IR35. Having a love for acronyms and being 43 at the time, Spectre wanted to call the new tax IM43 or IS43, but then Ivor Richards, a high flyer in the Treasury who was 35 at the time pulled rank and IR35 it was.

The problem with IR35 lay with the judiciary. Tribunals and courts too often sided with the tax-paying customer. They simply didn’t understand how they were meant to interpret it. As a result, IR35 had become something of a voluntary tax. 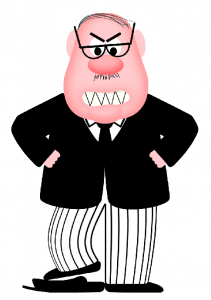 Towards the end of 2016 Ian Spectre reached the age of 60 where he became entitled to retire on a full civil service pension. His small, detached house in suburbia was adequate for his needs. But the problem with suburbia was that there were too many tax-paying customers. Worse, many of the customers had children. Pre-customers as he frequently thought of them. These pre-customers would often kick balls into his garden and expect him to return them. He had had many arguments with their mothers where he had defended his right to puncture the balls.

Upset over the bothersome pre-customers and this trouble with his precious IR35 tax, Spectre set about devising a plan.

He approached James Fortesque-Simmonds at the Treasury, shortly before his retirement, and asked if he could return as a consultant on a day rate to come up with ideas to make sure that customers paid the right amount of tax.

Fortesque-Simmonds readily agreed (sometimes Spectre’s devious plans paid out big) and so Spectre left employment one Friday only to return to his desk the following Monday, but not as an employee. He had set up a company, Spectral Customer Care Limited. Spectre didn’t need to draw any money from his company because he had his pension to live on. He reasoned to himself that he would work for a further two years, pay the right amount of corporation tax, and then liquidate his company, realising a capital gain on which he would pay the right amount of capital gains tax, 10%. He had seen accountant Edward Peters at Warr & Co do the same for many of his clients, so if it was good enough for them it was good enough for Ian Spectre. With the proceeds from the liquidation and the money he would get from selling his house in Suburbia he could buy somewhere in the country, far from any customers or pre-customers.

Shortly after starting his consultancy he re-visited his old notes on IR35. “I wonder if I can make this work” he thought to himself. “Suppose I was to take away concepts such as substitution and other personal factors that the judiciary simply didn’t understand” he went on. “I know, why don’t we make the end client decide whether or not IR35 applies, take the decision away from contractors”. He thought on and reasoned that banks would probably find loopholes. “But what if we restricted it to the Public Sectre?” Now he had a plan!

“Obviously the small public bodies won’t have a clue about IR35 as they are largely run by imbeciles, yes this is a fantastic idea, the poor idiot contractors won’t know what hit them! And as for the larger public bodies like the NHS, sure there are plenty of imbeciles there too, but they might put their heads together and try to bend the rules to favour their contractors… We can’t be having that…” he mused, “I know, I’ll design a toolkit which will come out with the ‘right’ answer (aka MY answer), put it online and watch as the imbeciles follow it’s instructions blindly! Perfect, I’ll get exactly what I want!”.

Two months later he arranged a meeting with James Fortesque-Simmonds and went through it all “That’s brilliant” Ian Fortesque-Simmons said. “We’ll get this implemented from 6th April and I think we’ll call it Spect-IR35. We’ll tell these customers that they can no longer use their limited companies and we’ll tell them they must use Public Sectre Umbrella Limited. Public Sectre bodies will pay the same rate to PSU, but PSU will hold back deductions and be responsible for employers NI. The customers won’t know what’s hit them but there’s nowhere else for them to go, so they’ll have to take it on the chin. From now on Ian you must call me James”. The two men shook hands and Ian felt rather pleased with himself.

Three months later Spectre has just finished Hectoring some customers whose record keeping had fallen below the standard expected. He had managed to issue £10,000 worth of penalty notices. An email arrived. It was from Sally Jones, the local Director of Office Politics. “What the hell does she want?!” Spectre barked. He opened the email and started reading.

I wanted to write to you to let you know that although you are no longer an employee, we value you as a member of the team. We want you to feel welcome in the staff canteen. And we would be delighted if you would join in some of our out of work activities. You might not be aware, but I’ve organised 10 pin bowling for next Wednesday evening. I’d love it if you could join us. I’m sure you’ll get on with everyone. I think you know Polly Brown from the VAT office don’t you? She’ll be coming along ………..

Spectre’s face reddened “10 pin bowling with Polly Brown” he growled “I’d rather have root canal treatment.” He read on

…….there’s one small matter I need to raise with you. There’s some new legislation called Spect-IR35. I don’t know too much about it, but I’m told it applies to you. Instead of using your limited company from now on you’ll be routed through Public Sectre Umbrella Limited. PSU will deal with employers NI, PAYE, Employees NI and something called the Apprenticeship levy. You’ll receive a payment into your bank and you won’t have to worry about tax. I’m sure you’ll find it a lot easier.

Spectre printed the email and stormed into Fortesque-Simmonds’s office. “Spectre old man, how are you?”, James said. “James” Spectre said trying to catch his breath “what’s this all about?” Spectre threw the email on James’ desk. “I’m afraid that’s right”, James said “we’ve put you through the toolkit and you’re caught by Spect-IR35. Here, come and have a look at it”. Spectre felt very hot under the collar “I’m a consultant, not a customer”, he shouted. “Sorry old chap”, James replied, “take it or leave it; perhaps you can get work in the Private Sectre if you don’t like it here. Now I’m busy old chap, so off you go – oh, and next time, call me Sir”.

Spectre left feeling deflated. The two years he thought he would have to work to get his house in the country would now be 5 years. He had scored a spectacular own goal. Pity the next customer in his sights.